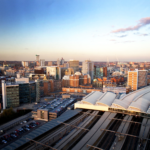 Leeds train station is the third busiest railway station outside of London, and its importance to our city
can’t be understated. It serves over 30 million passengers a year and provides connections to all of the
major cities of the mainland from its 17 platforms.

Let’s take a look at the history of Leeds train station and how it ended up being such a crucial part of the
North of England’s railway network.

The early history of Leeds station

Leeds had a temporary station as far back as 1846, but it wasn’t until 1850 that a more permanent
structure was built on the top arches over the River Aire. Known as Wellington Station, it served the city
well for nearly twenty years, until the continued growth of Leeds necessitated an additional station to
be built.

New Station, designed by renowned architect Thomas Prosser, was built just south of Wellington Station
in 1869. Its construction included a network of arches and tunnels that crisscrossed the River Aire and
Leeds and Liverpool canal basin, which are still features of the station today. In fact, local companies
soon took advantage of the perfect location of these arches to set-up their businesses to catch passing
trade or to store goods – and they still do.

In 1938 the new City Station was built by combining the two older stations. It connected with the
recently rebuilt LMS (London, Midland and Scottish Railway) Queens Hotel to form a stylish art deco
structure.

It was unfortunate timing because the upcoming blitz meant that Leeds train station took several direct
hits and required extensive repairs after the war. However, the new station thrived, and along with
Leeds Central Station, they served the North well until the late 60s.

The second rebuild in 1967 was necessary to pick up the slack left by the closure of Leeds Central.
During this refit, Wellington exclusively took over parcel transportation, leaving the south side, along
with the new south concourse, to cater for the 2.75 million passengers who now used the station
annually.

Over time the Wellington side of the station fell into disuse, while the flourishing passenger areas
struggled to meet the demands of the growth of Leeds as a city. It was decided that a major
refurbishment and upgrade were necessary and this began in 1999.

By 2002 Leeds City Station had reinvigorated the Wellington side to up the number of platforms from 12
to 17. This, along with a new footbridge, lifts and escalators for access, a new glass roof and refurbished
North Concourse meant that Leeds was ready for anything! In 2016, a new southern entrance was also
developed and opened – catering for the growing number of travellers and business people visiting our
fair city.

Leeds train station continues to thrive today, and we’re glad that we have it on our doorstep!