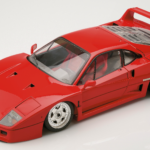 When Ferrari decided to celebrate their 40th birthday with the scintillating Ferrari F40, they made the
world a better place for petrol heads forever!

This brutal beast of a machine is still the fastest road car the Italian giant has ever made – and for
many, it’s the greatest car to wear the iconic prancing horse emblem.

What made the F40 special?

Considering that the Ferrari F40 was designed, tested and brought to production in just 13 months,
it’s incredible to think just how special it is. Chief designer Leonardo Fioravanti realised that the goal
was to create the fastest production car in the world, and you can clearly see that in the design –
that massive rear spoiler isn’t just for show!

In fact, there’s nothing unnecessary on the F40…

The car weighs as little as a Mark 1 Yaris and once you step inside you’ll see why. Slip into the
driver’s seat and you’ll be forgiven for wondering what your money gets you because it’s certainly
not luxuries – there’s nothing in there except seats, a wheel, pedals and gear stick! But this weight
saving coupled with the legendary 2.9-litre turbocharged V8 helps propel this Italian rocket to
60mph in 3.7 seconds and on to over 200mph.

This would be incredible performance today, but when you realise that this is a car without
computer assistance and traction control to keep you on the road, you can see why it’s such a
snarling beast. The F40 was the ultimate 80s driver’s car… and it’s just as exciting today.

Is it possible to buy an F40 today?

Surprisingly there are quite a few F40s on the classic car market, but unless you have very deep
pockets you won’t be driving home with one. As little as five years ago, you could pick one up for
around £150,000, but times have changed. The market for modern classics is always fluctuating,
which means a decent F40 will set you back every penny of a million quid!

It’s worth it though because you’re buying what is essentially a road-legal racing car, and it’s unlike
anything a modern manufacturer would get away with releasing today. The F40 is about as health
and safety compliant as a rocket strapped to shopping trolley… but, boy is it fun!

The team at Trafalgar Street car park love the Ferrari F40, so if you’re lucky enough to own one
please drop in and show us – or take us for a spin!