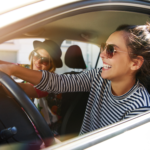 When the Aston Martin DB9 rolled off the production line in 2004, it set a new standard for the grand
tourer form.

It was the first Aston Martin to feature a Ford chassis, and its all-aluminium construction was a
masterpiece of engineering and design… and we love it just as much now as we did back then!

History of the DB9

Although the DB9 shared similar looks with its predecessor, the DB7, it was a considerable improvement
over the older car. The aluminium chassis had twice the strength of the ageing Jaguar XJS unit used in
the DB7, but weighed 25% less. This was a saving that massively improved the power to weight ratio and
handling of the newer model.

The DB7 was already beautiful to look at, but the subtle refinements made to the DB9 took its styling to
the next level and made it look like a grown-up version of its older brother.

At the time, people wondered why Aston Martin chose to skip ‘DB8’ and go straight to DB9. However,
the designers felt that the ‘8’ would give the wrong impression that the car was fitted with a V8 engine
instead of the 5.9-litre V12 it shared with the V12 Vanquish.

The first thing you notice when you start up the DB9 is the engine note. It’s deep, throaty and roars as
only a monster V12 can! The ride and steering on the early cars left a little to be desired, but the later
models corrected these issues to give more feel and improve the quality of the ride.

Despite these concerns, the DB9 was still a gratifying car to cruise around in, and it’s definitely worth
considering a well cared for early example because you’re bound to get a bargain!

Obviously, the Aston Martin DB9 is still a premium luxury car, and with an original sale price of around
£150,000, you’re not going to pick one up for peanuts. However, 25k will get you a nice clean early
example with average mileage (about 40,000). As with all used cars, it pays to do your homework and
pick a vehicle with a full main dealer history.

The early cars had issues with unreliable electronics, but a decent service history and thorough check of
all the electronics should ease your fears.

There’s no doubt in our mind that the Aston Martin DB9 is one of the most beautiful modern classics to
own, so don’t be afraid to splash the cash… oh, and we’ll expect you to pop into Trafalgar Street Car
Park to show it off to us!