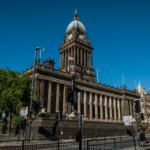 If you’re a photographer, we absolutely recommend visiting Leeds city centre for a photo walk because
it has some of the most interesting architecture – both modern and period – in the country. In fact,
Leeds should be on every photographer’s ‘to do’ list!

Leeds is blessed with some stunning old architecture – so much, in fact, that you’re almost spoilt for
choice:

● Corn Exchange – designed by Cuthbert Brodrick, the Corn Exchange has been part of Leeds
landscape since 1864. It’s an interesting building from the outside, but once you step through
the door your camera will love you! The circular form, domed roof, arches filled with boutiques,
and wonderful light make for great images.
● Leeds Town Hall – with its clock tower, stone lions and columns, this imposing building has so
much potential for the photographer, so make sure it’s on your list when visiting Leeds city
centre.
● Victoria Quarter – from the arches and domes of the glass roof to the mosaic floor and wall
paintings, Victoria Quarter has enough quality and beauty to fill an entire memory card. Take a
tripod along during quieter times and try some HDR shots – you won’t be disappointed!

Sitting alongside the original buildings some of the best examples of modern architectural design –
buildings that have changed the character of Leeds for the better over the past 20 years:

● Bridgewater Place – ‘The Dalek’, as it’s affectionally known, is the tallest building in Yorkshire
and dominates the city’s skyline as a result – making its impressive mass a ‘must photograph’.
● Victoria Gate – this bold design featuring a criss-cross pattern and blue glass may not appeal to
everyone, but nobody can say that it isn’t striking! It’s a fine example of modern design and
definitely worthy of a visit with your camera.
● Leeds Dock – on the edge of the city, Leeds Dock is deserving of a photo walk of its own, with
the Royal Armouries, Knight’s Way Bridge and Clarence House – not to mention the waterside
area.

These are just a few of the highlights but don’t forget to take in the Laidlaw Library, Trinity Leeds and
the First Direct Arena on your stroll around the city – they’re all fascinating examples of the best of
British design. So, whether alone or with friends we’re sure that visiting Leeds city centre with your
camera will be a day to remember.

In a world where SUVs and MPVs are increasingly popular, the best estate cars are fighting back and proving that…..

80s sports cars provided the perfect mix of speed, style and hair-raising handling – and that’s why you look back…..