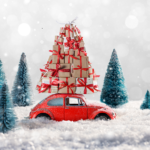 With Christmas just around the corner, we thought it would be fun to list the coolest cars in
Christmas movies. We love Christmas films and cars, so as it looks like we’ll all be a little limited on
seasonal socialising this year, we thought we’d put this great combination to see what we could find
– and maybe inspire you for a movie night at home!

The 1954 classic White Christmas features a couple of great vehicles for the car buff. Firstly, there’s
the old WWII US military Jeep, which is a classic in anyone’s book, and it’s fair to say that the war
couldn’t have been won without them.

Secondly, we have one of the coolest cars ever made: the 1950 Plymouth Special Delux Station
Wagon that ferried customers to and from the Columbia Inn. It’s a real beauty with that classic
station wagon wood panelling on the bodywork.

If Scrooged isn’t one of your favourite Christmas movies then never show your face at Trafalgar
Street Car Park again! We’re joking, of course, but it is brilliant. One of our favourite parts is when
the Ghost of Christmas Past takes Frank on a wild and dangerous ride in a New York City cab. We
love those big yellow cabs anyway, but when one is driven by such a terrifying character it just
added to the cool factor.

Jingle All the Way

Arnold Schwarzenegger’s hilariously cheesy Jingle All the Way may not seem an obvious choice for
this list, but if you watch carefully you’ll see one of the coolest cars ever in a Christmas movie.
During the Christmas parade scene, there’s a shocking pink 1980 Chevrolet Corvette, and we would
so love to take it for a spin!

Home for the Holidays

Romantic comedy Home for the Holidays directed by Jodie Foster didn’t exactly set the world alight
in 1995, but it did feature one absolute classic American muscle car. Years before Robert Downey, Jr.
Became Iron Man and whizzed around in his collection of supercars, he drove a gorgeous blue 1970
Pontiac GTO in this otherwise average Christmas movie.

George Bailey’s 1919 Dodge Brother Touring Car may have had an unfortunate ending when he
crashed it into a tree in this classic Christmas movie, but it did lead to his revelation about himself

and his place in the world. The car itself was restored and is alive and kicking today in a Colorado
collection.

We’re pretty sure that these are the coolest cars in the history of Christmas movies, but if you think
we’ve missed any off the list head over to Twitter and let us know!