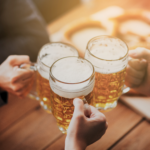 Finding the best craft beer pubs in Leeds was a tough task, but we did it just for you! Seriously though, if
you’re obsessed with real ales these great pubs have to be on your list for a night out or a relaxing pint
at lunchtime.

We love Bundobust for its brilliant name, the incredible vegetarian street food and the craft beers! It’s
one of the nicest places to grab a quick meal and wash it down with a delicious pint of Bombay Dazzler
or a bottle of Celestial Tar Conspiracy. We’ve never been disappointed with Bundobust and recommend
it to anyone who wants craft beer in a relaxed environment.

Mill Hill is also home to Head of Steam, another of the best craft beer pubs in Leeds. This pub really is an
essential stop for fans of real beer because it features a huge selection of draft beers, lagers and ales.
The staff are knowledgeable and every beer is served in the correct glass – a ‘must’ for the genuine
enthusiast! We’re particularly impressed with their Belgian beer offerings, which must be the most
extensive in Leeds.

From the outside it’s hard to tell that Craft Asylum #1 is even a pub because it looks more like a modern
cafe or corporate building. However, once you step through the door you’re greeted warmly and offered
a range of local craft beers that matches any pub in Leeds. Oh, and if you’re lucky you’ll get a free bowl
of popcorn to enjoy with your pint!

Foleys is a friendly, traditional Yorkshire pub with a decent choice in local craft beers and ciders from
around the world. York Brewery pints are £3 during happy hours, but to be fair, the craft beers are
pretty decent value at all times. We also recommend the cheeseboards, which go perfectly with a
delicious pint of real ale!

There are loads more real ale pubs to choose from, so don’t be afraid to hunt around. As far as we’re
concerned, though, these are the pick of the craft beer pubs in Leeds for the real aficionado!