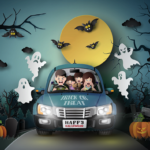 With Halloween fast approaching, we thought it might be fun to share some spooky cars inspired by
the scariest night of the year.

The Trafalgar Street Car Park team have put our collective heads together and come up with a list
terrifying enough to give you nightmares!

If you’re looking for spooky cars, who you gonna call? That’s right – the Ghostbusters… and their
iconic 1959 Cadillac Professional hearse, Ecto-1. The sound of the screeching siren as Dan Aykroyd
and pals whizzed through the streets of New York catching ghosts is enough to send chills through
any scary movie fan.

Do you believe in curses? Well, neither did we until we heard about this fated Graf &amp; Stift Touring
Car. Infamous for being the vehicle Archduke Franz Ferdinand was assassinated in (the incident that
led to WWI), it was subsequently owned by several others who suffered equally horrible deaths. It’s
now on display to the public in Vienna… but don’t sit in it or the curse might afflict you too!

70s horror movie The Car featured an unmanned 1971 Lincoln Continental that went on a
murderous rampage. The heavily modified car was black, brooding and bad to the bone (or should
that be chassis?!). It’s never revealed how or why this happened, but maybe it was the Devil
himself!

No list of Halloween inspired cars could be complete without the incredible Munster Koach. The 18-
foot long hotrod was made from three Model T Fords and had the engine from a ’64 Mustang. The
interior was blood red and the exterior black and gold – all of which made this incredible one-off the
most memorably scary car ever.

In a similar vein to The Car is Christine. The 1983 movie based on the Stephen King novel is about a
beautiful red Plymouth Fury that becomes, well, furious if anyone comes between her and her
owner. We love this film, but as car enthusiasts, it does discourage us from restoring any old classics
without booking in an exorcism first.

We hope you’ve enjoyed this trip through our Halloween inspired vehicles. If you think we’ve missed
anything from our list head over to Twitter and let us know – but don’t set any vampires or
werewolves onto us, and no spooky cars terrorising our car park please!