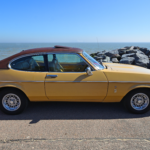 If you’re looking for a spooky night of fun to remember, you’re in the right place because we’ve found you…..

Working on your own car might seem like a bit of a fanciful idea, but with these essential mechanic tools,…..