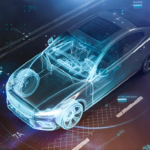 It doesn’t seem all that long ago that seat belt use was optional and airbags were treated with
suspicion, but the extensive safety features in modern cars have made driving safer than ever, right?
Statistics seem to suggest this is the case, with deaths from road traffic accidents declining steadily
decade on decade.

Let’s take a look at some of the features that are responsible for keeping us safer on the road than
ever before, and the statistics to back their use up.

Modern cars are designed to crash

One of the unsung safety features in modern cars is the car’s frame itself. It may not be as exciting as
computer-assisted braking or parking, but it’s a fundamental of physics that energy has to go
somewhere and it’s far better that your car crumples and absorbs impact than the shock is sent
through your body. This is achieved by using different strength steel throughout the frame –
stronger around the cabin and weaker in the crumple zones.

Although fully autonomous driving is still in its infancy, it’s clearly the future – especially for
motorway journeys because it reduces driver fatigue.

But until we reach that point, there are some incredibly smart additions to modern cars that reduce
accidents and improve safety for all road users:

It’s clear that these features make a difference, but how much? One report suggests that AEB and
FCW alone lower injuries from accidents by over 20% and vehicles with blind spot monitoring are
14% less likely to crash. Once all of these safety features in modern cars become widespread we’re
sure that incidents across the board will drop, and that’s great news for all of us.

We’re hopeful that at least some of these fantastic spring events in Leeds still go ahead, but in the light…..

With many manufacturers launching exciting new cars in 2020, we decided to share five that we’re excited to see hit…..