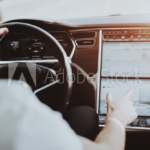 It seemed like the Tesla 3 was unrivalled in the electric mid-sized saloon market, but has that
changed with the introduction of the Polestar 3?

Can this collaboration between Sweden and China take the crown from Elon Musk’s often
championed electric vehicle (EV)? Let’s find out…

What is the Polestar 2?

Polestar used to be the high-performance arm of Volvo (think Abarth and Fiat), but in 2017 Volvo
and parent company Geely, decided to let it spread its wings and developed it as a dedicated EV
brand.

The Polestar 1 was a £140k 2+2 coupe hybrid designed to compete with Bentley and BMW, and it
did it with style, but it wasn’t a car for the masses. Has that changed with the Polestar 2?

Well, it’s a pure EV, costs around £50k, looks quite a lot like a Volvo – it’s built on the underpinnings
of the wonderful XC40 – and its interior is classy, sleek and wonderfully Scandinavian. It’s quick – 0-
60 mph in under five seconds and with the instant pick-up that you get in any pure EV – and the
range is decent at a claimed 292 miles on a charge (although you can expect nearer 220 with real
world use).

Is it better than a Tesla 3?

The best compliment we can give the Polestar 2 is that this is close! It’s hands down a better built car
– there’s none of the cheap plastic you find in the Tesla, and the cabin is a bit more user-friendly
with one of the best infotainment interfaces you’ll find in the entire industry.

Both cars are 4WD with a motor for each axle, and they’re both decent to drive, but the extra 300kg
of the Polestar makes it a little less sure of itself through the corners. The steering is more precise
and engaging in the Tesla too. That’s not to say the Polestar isn’t fun – it is. It’s just not quite the
thrill a minute that the Tesla is.

The Tesla is also more practical with loads more space in the rear for passengers, a larger boot and a
usable front boot.

Reliability is where the Tesla falls down. It’s full of niggly problems because Elon Musk tried to meet
the huge demand by rushing cars through his Chinese factory. You might need your Tesla dealer on
speed dial when you buy a Model 3…

It’s early days for Polestar, but with Volvo 11 th in the latest reliability ratings, you stand a better
chance of forgetting your dealer’s name by owing a Polestar 2.

So what do we think?

Choosing between the two cars is really tough. They’re both incredibly cool, and if it’s driveability,
speed and practicality you want, the Tesla Model 3 wins. But if you want a stunningly sleek electric
vehicle that won’t break down every week, then we’d spend a little extra on a Polestar 2.

Despite the challenges the coronavirus pandemic has caused for the high street, we’re pleased to say that it’s not all…..

After the highs and lows of 16 years in the lower divisions, we’re absolutely overjoyed to see Leeds United promoted…..